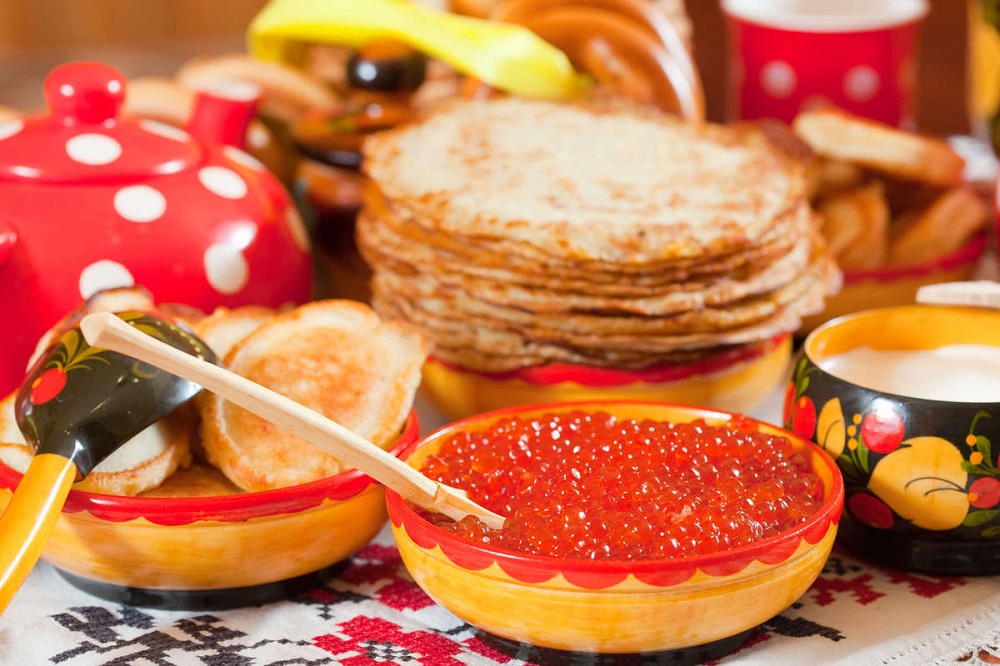 Street theater performances , stand-up fights, tug of war, dizzying carousels , workshops, handicraft fairs, funny contests and mountains of steaming pancakes with honey and jam – all this awaits Muscovites and city guests from February 24 to March 2, during the celebration of «Wide Maslenitsa».
The festival will take place Moscow in pedestrian zones, parks, as well as the city’s main streets. You will find tables with pancakes in Novopushkinsky Square, at the Kuznetsk Bridge Street, Bolshaya Dmitrovka Street, Kamergersky and Stoleshnikov Lanes and on Rozhdestvenka Street.
The biggest pancake fest awaits you on February 26. On this day, the biggest pancake (1.5 meters diameter) will be cooked near TSUM.
On February 27 an event called «Say Something Nice» will take place in Kamergersky Lane. Everyone will have an opportunity to confess his love and wish all the best to others.
Maslenitsa Parade «Light the Sun» is scheduled on February 28. Students, musicians, clowns will see the winter off with songs and dances. Anyone can join the parade. Owners of the most creative costumes will be awarded with gifts.
The culmination of the «Maslenitsa Festival » will be held at the museum -estate «Kolomenskoe» on March 1. A town from ice slides and snow cannons to produce snow will appear there.
The holiday will start from the concert of contemporary music with folk motifs. At 18.00 Maslenitsa Carnival doll, about seven meters height, will be burned, due to the Russian tradition.
The «Muzeon» Park organizes a spectacular ethno-folk festival. Here you’ll find musical performances, fairs, games and pancake tasting. You’ll be able not only to buy pancakes, but also get some national products and souvenirs.
The Gorky Park presents Maslenitsa program «Surprise and Be Surprised». For example, instead of burning the traditional doll, an organ will be burned here, the organizers of the event promise, that it will play music, while flaming. This performance will be held on March 2. There also be a lot of pancakes, crafts fair, creative workshops, entertainment shows, performances and, of course, the traditional Maslenitsa festivities and games. The youngest visitors of the festival will be taught to play folk instruments.
Pancakes, sweets, souvenirs, competitions, interactive games, handicrafts products at affordable prices are waiting for you in «Sokolniki» Park. Holiday Fair will run from February 24 to March 2.